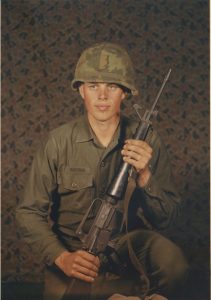 Sergeant Keith Mauerman was leading his squad through the rural farming area near Fire Base Uplift, Vietnam.  As part of 173rd Airborne Brigade, they were tasked with keeping so-called “tax collectors” — Viet Cong or North Vietnamese – from taking money from farmers.  Always lurking was the fear that the villagers were farmers by day, and Viet Cong by night.   The unit had been helicoptered in, but had to hike back to camp, and after a day’s rest they would repeat the cycle.

In May 1970, the company was sent on a mission that dramatically and permanently changed Mauerman’s life.  During the night, they were helicoptered into a staging area, and at dawn, they began moving in on a North Vietnamese Army base that had been attacked by Army Rangers.  The 173rd soldiers were on mop-up duty.  After the helicopters strafed the base and dropped 55 gallon barrels of bunker-neutralizing “foo gas,” Mauerman’s unit moved in, only to find the base deserted.

The weary company began hiking back to Fire Base Uplift.  Mauerman’s squad took the lead.  His experienced point man had been shot two weeks earlier, so an inexperienced private volunteered to take point.  It was a hot, muggy day, and the company was anxious to get back to Fire Base Uplift.  The men began crowding closer to the point, creating a recipe for mass casualties from an ambush or booby trap.  At a point where the trail split, the point man spotted a warning sign.  Mauerman closed in to investigate, and just as he arrived, a Claymore mine blasted 700 steel balls in a 60-degree radius for fifty yards.   The Sergeant and his point man were both hit in their lower legs.  Five others were injured.

Mauerman and the point man were given first aid and evacuated to an aid station.  Mauerman’s dog tags were blown off in the blast, resulting in his getting the wrong blood type in a transfusion.  Doctors determined that both men needed bi-lateral amputations of their lower legs.  After a week, Mauerman, gravely ill from the receiving the wrong blood, was sent to an Army hospital in Japan.

It’s been over 48 years since that fateful day.  The Bronze Star and Purple Heart recipient says through all the pain of recovery and rehabilitation, the victories and setbacks, his wife Jenny has been an invaluable support.  He is also very grateful to the Salt Lake VA prosthetics unit for its outstanding treatment.

Mauerman says, “If I could stand shoulder to shoulder with Revolutionary soldiers and WWII soldiers and every soldier who has fought for this country, then it is all worth it.”