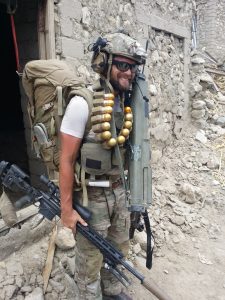 It was a long, arduous, and danger-laden day for Sergeant First Class Ronald Madsen. The special operations Soldier from Honeyville, Utah was part of joint U.S. and Afghan special forces clearing the hotly-defended Mohmand Valley in southern Nangarhar, Afghanistan.  Madsen was the Senior Weapons Sergeant for Special Operations Task Force-Afghanistan and was leading a dismounted American element in the operation. They had been receiving relentless enemy fire and resistance for eight hours. But the worst was yet to come.

As darkness began falling, Madsen and his men were preparing a building to occupy for the night. Without warning, there was a devastating explosion inside the building, and over 30 personnel were instantly wounded, and four were ultimately killed.   Sergeant First Class Madsen was hit with the powerful concussive blast and riddled with anti-personnel shrapnel.  Before anyone could reach the safety of any vehicle, ISIS Khorasan (ISIS-K) fighters launched a coordinated attack, seeking to press the advantage created by the explosion.

Recognizing the perilous situation and despite his wounds, Madsen directed the U.S. Infantry soldiers around him to return fire with every weapons system at their disposal.  Madsen crawled and pulled his way into one of the task force vehicles and squeezed into the turret.  He took control of a MK19 automatic grenade launcher and delivered punishing suppressive fire on the emboldened ISIS-K fighters.  Once that weapon emptied, he picked up a light machine gun, and engaged enemy positions until again he ran out of ammunition. Then, he put a MK14 grenade launcher into action. By now, his fellow soldiers had organized themselves, and the volume of fire they were delivering matched their leader’s. Madsen’s courageous and determined example inspired the limited number of troops who were not already wounded or rendering aid to violently strike back at their attackers, ultimately suppressing the threat long enough for the medical evacuation helicopters to load the most critical patients.

For his actions during this deployment, the third of four that the Utah National Guard Special Operations Soldier would serve, Madsen earned the Silver Star for valor and three Purple Heart medals.  SFC Madsen says, “The most devastating part of war is living through a battle when your friends did not.  Fighting is the easy part, but looking into the eyes of the families who’s loved ones gave their life is the hardest battle you could ever face.  War brings out the best and worst in people. The kindness and empathy you see in battle I can’t put into words.”