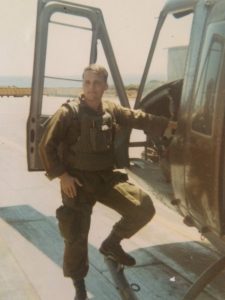 Chief Warrant Officer 2 Richard Lund entered Army basic training in October 1968.  Following basic, it was off to flight school, which he completed with distinction, and then medical essentials training for Army Aviators.

Lund deployed to Vietnam in October 1969 with the 54th Medical Detachment (MD), 61st Medical Battalion. He initially served as a pilot, flying medical evacuation missions, supporting ground troops within his area of operations.  Lund was next promoted to Pilot in Command (PIC), a feat achieved by only 10 other pilots in the 54th MD. When he left the theater of operation in March 1971, he had flown over 725 hours of medevac missions.

A mission for which Lund was PIC provides a classic example of the extraordinary challenges of medical evacuation.  Upon departing his forward operating base on a night mission, his team of two UH-1 Huey helicopters ran into a low cloud ceiling and rain.  Combined with darkness, it severely reduced visibility. The weather conditions also reduced the ability of the choppers to function at optimum levels.  Worse yet, the darkness and weather made it impossible to pinpoint the location of the unit requesting help.  Lund directed the commander on the ground to employ flares. While this gave Lund’s crews the approximate location, it also lit up the helicopters and made them primary targets for ground fire. Up to that point, the enemy had just been firing at the ground unit, but now, the helicopters were taking fire. Lund took the lead and began spiraling his aircraft downward toward the dense jungle canopy. He maintained effective coordination with his crew and slowed into a hover just above the canopy. Using the helicopter’s hoist, his Crew Chief was able to load the casualties.  Despite the increasing accuracy and rate of enemy fire, Lund was undeterred and held his position until the two casualties were safely aboard and the mission was completed. The courageous actions of Lund and his crew resulted in two lives being saved and Lund receipt of the Distinguished Flying Cross – one of two he received in Vietnam.

Of his Army service, CW2 Lund says that he had the greatest admiration for his fellow service members and attributes his achievements to their teamwork.  He said, “I always wanted to do my part. I felt it was my responsibility to do my job to the best of my ability.”  His passion for safety continued after his military service; he spent over 39 years with the Federal Aviation Administration in Air Traffic and Flight Standards.