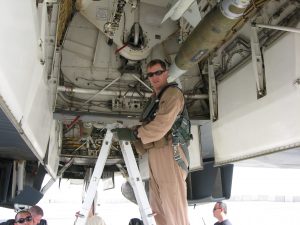 “Danger close” describes a situation when U.S. forces on the ground have closed so tightly with the enemy that any air support called on the enemy will also be in dangerously close proximity to friendly forces. This is the situation T.J. Eaton encountered in July 2008 in the Battle of Wanat, Afghanistan, during the largest enemy attack in Afghanistan to that date.  This was his first combat tour, flying B-1 Bombers from a base in Qatar and conducting combat sorties over Afghanistan that typically lasted 12 to 16 hours in the air, with the help of re-fueling tankers.

As the aircraft, call sign Bone 11, closed in on the battle, exhaustive checks we repeatedly performed by flight crew and support units on the ground to ensure the necessity and accuracy of the bombing runs.  This time, an American base was in danger of being overrun by Taliban fighters in a well-coordinated 360-degree attack.  As Eaton closed in, one of four hydraulic systems failed, limiting aircraft maneuverability.  The primary radio failed and the secondary radio failed, causing a cockpit fire that was quickly extinguished and forced the crew to use a low power tertiary radio.  With multiple malfunctions and no other airborne assets capable of providing close air support, Eaton and his crew continued the mission.

With the terrain limiting communications with the ground controller, Eaton skillfully maneuvered the heavily loaded plane around 26,000 foot mountain peaks and over the next several hours, he and his crew employed fifteen 500 and 2000 pound munitions on nine target sets, all under danger close criteria, saving the lives of 62 U.S. ground forces.  To carry out the mission, Eaton had consciously taken the aircraft below the minimum fuel level to safely return to base.  When other attack aircraft arrived, they disengaged, refueled in flight, and started back to base. When a second “troops-in-contact” situation materialized in central Afghanistan on the way home, Eaton and his crew engaged the massed enemy troops and neutralized them with three bombs.

The Bone 11 crew earned the Air Force Association’s General LeMay award as Bomber Crew of the Year.  They received the Single-Sortie Air Medal, which was later upgraded to the Distinguished Flying Cross for courage, devotion to duty, and extraordinary aerial skill under adverse conditions.  Eaton’s other awards include the Meritorious Service Medal, three Air Medals, and three Air Force Commendation Medals.

Eaton finished that deployment and completed three more.  He is now a Lieutenant Colonel with the 419th Fighter Wing at Hill Air Force Base.  Lt. Col. Eaton said, “The bond that develops between those who share combat is unbreakable. It is something that never leaves you.”