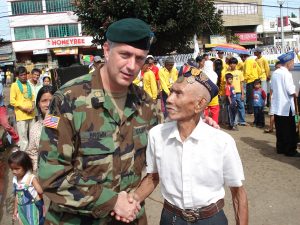 Captain Kevin “KB” Brown was leading Operational Detachment Alpha-923 of the 19th Special Forces Group up a narrow and treacherous Afghan mountain valley. They arrived by truck, by mule, and now on foot. They were making 300 meters an hour. Their mission was to scout a landing zone, assess enemy activity, and root Taliban fighters out of mountain caves. A week later, Brown’s ODA stood guard as planes swooped in delivering over 12,000 pounds of humanitarian aid.

That mission was finished, but Alpha-923 was not. They joined Afghan forces around Jalalabad, protecting the airfield, gathering intelligence, and conducting more than 20 combat operations and countless patrols. Brown had the dicey job of meeting with many village tribal leaders, whose allegiances were not always clear, but he said the Afghan soldiers were “great early warning devices” because they had incredible intuition about impending threats. When ODA-923’s mission was complete, the Taliban’s capabilities in the area were greatly diminished. For his leadership, Brown earned the Bronze Star.

It was quite a journey from graduating high school in Minnesota, enlisting in the Army, completing infantry training, serving with the Army Honor Guard, leaving active duty to ski and go to college in Utah, and qualifying for Special Forces and assignment to the 19th Special Forces Group. And it wasn’t over.

In 2006, then Major Brown was named commander of 150 U.S. soldiers providing special operations assistance to a task force of 7,000 Philippine soldiers targeting a terrorist group with ties to Al Qaeda. Brown assisted the task force in planning and executing over 45 combat operations and 200 re-supply missions in a high tempo environment. Several of their operations resulted in the killing or capture of high value targets.

In 2010, Brown volunteered for another deployment, serving as the Joint Operations Center Future Plans Director for the Special Operations Command and Control Element – Horn of Africa. He led the working group that planned special operations targeting The Lord’s Resistance Army, a vicious group that uses young captives as soldiers and sex slaves and has brutalized people and villages in central Africa for over 30 years.

Major Brown retired in 2014. In addition to the Bronze Star, he received the Joint Commendation Medal, three Army Commendation Medals, and four Army Achievement Medals. Looking back, he said, “The Special Forces motto is ‘De Oppresso Liber’ or ‘To free the oppressed’. I believe this was an underlying principle of all our efforts at the operational and tactical levels.”