In his late teens, Colonel Raymond Brim’s summers were spent shoveling ore in the Tintic mine in Dividend, Utah and using the money for classes at the University of Utah. 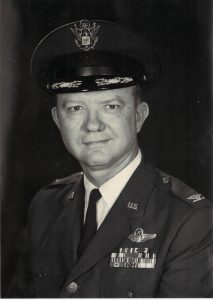 But the Japanese attack on Pearl Harbor changed that.  The 19-year-old withdrew from school and enlisted in the Army Air Corps.  By 1942, his training complete, he was on standby to be assigned to his combat group in England to fly the B-17 Flying Fortress.  But he had another mission first: to marry Patricia, whom he’d met on a blind date. He couldn’t get leave approved, so he had to go AWOL for three days as his crew covered for him. The couple anticipated a small wedding, but the headmistress of Rowland Hall, Patricia’s former high school in Salt Lake, would have none of it.  She marched the entire student body three blocks to St. Mark’s Episcopal Cathedral to attend the ceremony.

It was then quickly to England and flying bombing runs over France and Germany, but Brim’s special unit within the 482nd Bomb Group also had a secondary mission. Their planes carried the revolutionary Pathfinder radar guidance system, which enabled pilots to fly through bad weather and accurately bomb targets, instead of waiting for days for clear weather.  The crews spent much of their time engineering improvements to the radar systems.

After his 25th and final mission and receipt of the Distinguished Flying Cross and four Air Medals, Brim was assigned to train new pilots. He never lost a plane in combat, nor any of his crew members.

Brim was discharged in 1945, but in 1947, he accepted a commission in the newly formed U.S. Air Force.  He would continue his Air Force career for another 30 years. He helped develop remote piloting of unmanned B-17s, then oversaw their use as airborne research stations flying over atomic explosion test sites to collect data.   He pulled duty in the Aleutian Islands, Japan, Germany, and several tours in the Pentagon, and he was a Distinguished Graduate of the Air Force Command and General Staff College. Later, he graduated from the Air War College.

Colonel Brim retired in 1975. In addition to the Distinguished Flying Cross and four Air Medals, he earned two Legions of Merit and the Air Force Commendation Medal.  Brim says he’s never forgotten the men of his World War II crews, “I probably would not have survived my service in WW II without my flight crew, nine men who were a band of brothers and the maintenance crew that supported us.”