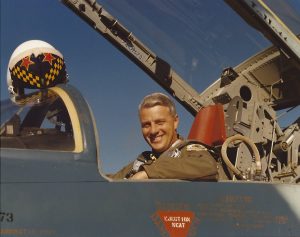 Lieutenant Colonel Harold Alston’s 28-year career in the Air Force began when a friend encouraged him to join the Utah Air National Guard at the age of 18.  He went to flight school and returned to fly the F-86, while starting a family and finishing studies at the University of Utah. His experiences in “the Guard” encouraged him to join the active Air Force and eventually led to combat deployments in Vietnam War—the first flying from Da Nang, Vietnam and the second out of Udorn, Thailand.  He flew the single seat F-104 “Starfighter,” the elite of the Air Force at the time.   He logged 136 combat missions, including 100 over North Vietnam. He was the first pilot to do so.

Alston remembers one “hairy” mission he flew alongside fellow pilot John Olson. Within six minutes of hearing that a friendly convoy was under attack along the Cambodian border, Alston and Olson were airborne.  When they arrived, a flight of F-100’s was firing rockets and dropping napalm. The two orbited until the F-100s, running low of fuel, turned for home.  On the last pass, however, one of the other F-100’s was hit by .50 caliber machine gun fire and started to go down.  Alston alerted the distressed pilot that he was streaming fuel.  Alston and Olson were left to cover the downed pilot.  “Down we went,” Alston remembers, “and immediately hundreds of muzzle flashes lit up the jungle.”  In all his time in combat, had never seen so much gunfire.  Over the next 45 minutes, in an effort to cover the downed pilot, he and Olson dropped napalm and strafed the area with their Gatling guns.  Later, despite an intensive search, the downed pilot was never found.  Alston recalls returning to his hooch later that night and talking about what happened. Says Alston, “It was a miracle we were not shot down also.”

Following his combat days, he spent much of his time training U.S. Air Force pilots and others from allied countries. Near the end of his career, he commanded the elite 65th Aggressor Squadron, training Air Force, Navy, and foreign pilots from around the world in aerial combat.

During his career, Lt. Col. Alston earned the Distinguished Flying Cross and 11 Air Medals.  Reflecting on his time in the Air Force, he says, “Nowhere except in my Air Force career could I have experienced such a variety of experiences and personal development. I’m grateful to have served and for the support of my family; and being a citizen of the greatest country in the world.”