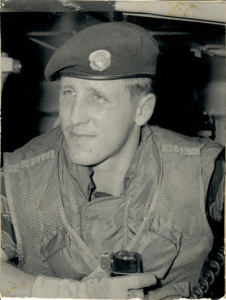 It was January 20, 1969, and a landing zone was under heavy fire. A pilot lay wounded amidst the chaos of battle, and Chief Master Sgt. Richard “Dick” Stiefken would save his life. Stiefken was a Pararescue man, or “PJ,” tasked with assessing and rendering medical attention to wounded personnel. As “Sandy” attack aircraft provided suppressive fire, Stiefken and his crew made their way to the lieutenant. In the midst of heavy small arms fire, the chopper pilot hovered briefly. Exposing himself to enemy fire, Stiefken reached out and pulled the Lieutenant to safety. This would earn Stiefken one of three Distinguished Flying Crosses.

Stiefken enlisted into the Air Force in January 1967. He was in college but felt “tired of spinning wheels. It was time to do something.” He planned on becoming an airborne weatherman, but the PJ mission held a certain appeal, so he decided to try out. A year and a half later, he completed his training and went to Vietnam. Stiefken and his fellow PJs, about 250 in total, were trained on all elements of rescue operations: parachute, freefall, scuba, mountain, and others. He and his fellow PJs were also trained to be highly proficient in providing medical assistance. Stiefken would later become a registered nurse.

During his pararescue career, Stiefken completed over 300 jumps. He and his team, usually two or three PJs, were tasked with making their way to wounded personnel, rendering medical attention, and evacuating the patients to safety. He was trained to deploy in a variety of aircraft, but in Vietnam, he deployed from the Kaman HH-43F “Huskie” helicopter. Stiefken performed extractions of troops in enemy contact, in night operations, and in river patrol boats, and he routinely treated wounded civilians in the village of Can Tho. Stiefken and his team were credited with saving at least 32 lives.

After Vietnam, Stiefken became an instructor for the PJ school at Hill Air Force Base. He provided instruction and mentorship to PJ candidates while leading the mountain phase of training, and he led evaluation of the school’s academic standards. Stiefken’s courageousness continued when he was stateside. In 1978, he received the Airman’s Medal, awarded for non-combat heroism at the risk of one’s life, after he rescued an injured victim from a burning vehicle following an accident.

Chief Master Sgt. Stiefken, who retired from the Air Force Reserves in 1989, humbly noted, “PJs get all the limelight, but those guys turning wrenches kept our aircraft together. The air traffic controllers, the ones cutting orders, everyone played a role in our efforts.”