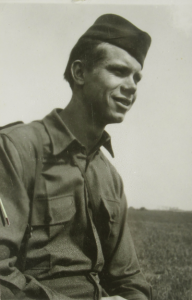 Cpl.Donald Pullan volunteered for the Army when he was 19 years old. Following basic training and chemical warfare school, he headed to Scotland aboard the Queen Mary as part of the 911th Air Engineering Squadron. Listed as the company clerk, Pullan never saw a typewriter during his service.

“We mostly cleared plane wrecks. If it didn’t burn, we pulled the guys out. If it did, we recovered the remains,” Pullan said. “When we got the signal that airships were returning from a run, we’d watch the skies looking for signs of distress. If a plane was flopping around, we knew it was a bad one. We’d just wait for them to hit.” The engineers got into some tough situations and saw some “god-awful things.” Pullan tells of a British Landcaster that was rapidly losing altitude when a German fighter came out of the sun and blasted right through it. The plane nosedived into a field. When Pullan climbed onto the fuselage to pull a crewmember free, he came away with just the upper half of the body.

Pullan hit Utah Beach on June 10, 1944 — D-Day plus four. His crew landed on the beachhead and hiked 10 miles before making camp in a picturesque pasture. Soon, they were on the move following the infantry through France and Germany and stopping to clear too many wrecks to count. The engineers were instrumental in liberating concentration camps at Buchenwald, Dachau, and Kassel. They saw gas ovens, bone piles, dead bodies littering the ground, and starving prisoners who were mostly skin and bones. Pullan’s voice still catches when he asks, “How could one human being do that do another?”

Pullan took his father’s camera with him. He bought film all over Europe and had buddies courier film back and forth for processing. One day, he was walking down a hillside and saw an old farmer with an ox cart. Pullan took a picture, put his camera back in the case, and promptly stepped on a landmine. The blast blew him one-way and his camera another. He was taken to a field hospital in the ox cart. Later, the farmer found the camera and gave it to the Red Cross. Since Pullan’s name and serial number were on the inside the flap, the camera found its way back to him. “I’ve still got that camera,” he said. “It’s older than me, and I’m 98 years old.”

Cpl. Pullan spent 60 days recuperating before being heading stateside. When he got back to Utah, he asked about a girl he once dated. “I was standing outside the Center Theater when Ruth got off at 10. I saw this beautiful redhead come out. I was gone,” he said. “We got married five days later.”