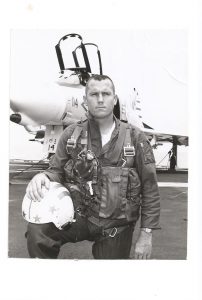 Captain David A. Dungan entered the University of Utah in 1952 and was the starting quarterback for the 1954 and 1955 seasons. As the Korean War draft was ongoing, the very astute football coach required all his players to join ROTC to protect them from involuntary service before graduation. Dungan remarks that he wanted nothing to do with the military; he came to Utah to play football, chase girls, and not much else. Dungan was commissioned in 1956 and became a fighter pilot, eventually flying F-4B Phantoms and completing three combat deployments to Vietnam aboard the aircraft carriers USS CONSTELLATION (CV-64) and USS CORAL SEA (CV-43). His squadron’s primary mission was flak suppression over North Vietnam in support of strike bombing and photo reconnaissance packages. Accomplishing this task required pilots to take a 30 degree dive towards the enemy at 10,000 feet and 500 knots. This placed the aircraft on the exact reciprocal course as the outbound fire from the enemy guns. The pilot maintained this profile while his Radar Intercept Officer calculated the release point for their bombs to take out the guns. Suppressing the flak guns was not the end of the mission, however. North Vietnam was extremely proficient with Soviet made surface to air missiles (SAMs). Typically they launched a two-missile salvo at the target aircraft but they were well aware that the F-4B could outturn and defeat the early SAMs. Thus, once the aircraft maneuvered, they would quickly launch a second salvo, giving the U.S. pilot four missiles that targeted his aircraft at one time. Dungan stated that a typical strike package might see 30-40 SAMs in a single mission.

Losses were heavy in Vietnam.  Dungan’s squadron suffered 30% losses including seven aircraft.  Many of those aircrew were either killed or captured.  For his 192 missions over North Vietnam, Dungan was awarded two Distinguished Flying Crosses, 16 Air Medals, the Navy Commendation Medal with combat distinguishing device, and the Navy Achievement Medal with combat distinguishing device.

CAPT Dungan served as a squadron commanding officer, commanding officer of a Naval Air Station, and subsequently returned to the University of Utah as the Professor of Naval Science, retiring in 1986 after 30 years of service.