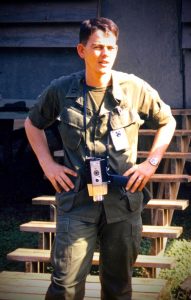 In August 1966, Captain Quayle W. Dutson returned from his honeymoon to an unexpected draft notice. Within a month, he was in basic training and then Clerk Typist school at Fort Ord, CA. In October 1967, he completed Infantry Officer Candidate School at Fort Benning, GA and was commissioned a 2nd Lieutenant.

After initial assignments, he was assigned to the 23rd Americal Division of I Corp in Chu Lai, South Vietnam from 1969 to 1970. Dutson was assigned as the Division G2 Night Duty Officer. He and his staff monitored radio contacts with firebases throughout the night, collecting reports of enemy activities and producing the intelligence summary for the division and specific briefings for flag officers and senior staff. After the briefings, he and a G3 operations officer flew with the Commanding General to firebases on alternate days. They were regularly the targets of small arms fire as they landed and took off from the firebases.

“On bad days when we were taking intense fire,” says Dutson, “the HUEY would either fly at 2,500 feet or a few feet off the ground down the roads and rivers to avoid small arms fire. They often flew high and ‘threaded the eye of the needle,’ as pilots called it, when they would free fall from 2,500 feet and rotate clockwise until they were a couple hundred feet from the firebase and then would open the blades to slow the fall and make a landing.” No matter what tactic the pilots used, the helicopters took some hits. Dutson said he was lucky not to get wounded whenever the helicopters were hit. Others were not so lucky.

On March 17, 1970, it was Dutson’s day to fly. When a newly assigned battalion commander asked Dutson the best way to get to know the area, he offered him his seat. Later, Dutson learned that the chopper was down and the battalion commander and many of the crew were killed and that others were injured.

At the conclusion of his tour in Vietnam, which later included serving as Secretary of the General Staff and Assistant Chief of Staff, Dutson was presented with two Bronze Star Medals and the Air Medal. He had previously earned two Army Commendation Medals.

CPT Dutson said that serving his country for four years in the U.S. Army was a sacred honor.  His love of freedom, the flag, and America skyrocketed. His mental and physical discipline multiplied, and achieving excellence became a lifestyle, not an event. The principles he learned in US Army have grounded him for his entire life.  He would not trade this experience for anything.