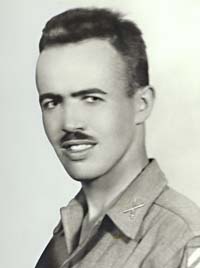 Garn Hatch received an Army commission through the University of Utah ROTC in 1939 and entered active duty in 1941. He served throughout World War II as an artillery officer with the 3rd Infantry Division. The 3rd Infantry entered the war in North Africa and participated in the amphibious landing at Sicily, followed by intense fighting in Italy. The division played key roles in the landings at Anzio and southern France. Later in the war, the 3rd fought at the Siegfried Line, Palermo, Nuremberg, Munich, Berchtesgaden and Salzburg where it saw 531 days of continuous combat. At war’s end, Hatch held the rank of major. In 2002, the Hatch family donated a large collection of their father’s wartime memorabilia and artifacts to the military museum at Fort Stewart, Georgia, home of the 3rd Infantry Division.