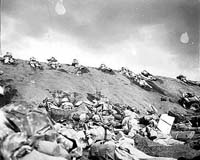 Homer Larson enlisted in the Marine Corps in 1942. In June, 1944, Larson and his fellow Marines went ashore in the first wave at Saipan where they held a beachhead against 30,000 well-entrenched Japanese defenders. By the time Saipan was finally secured, the Marines had suffered 13,000 casualties. In February, 1945, Larson was with the 5th Marines for the assault on Iwo Jima. Iwo Jima was a legendary 36-day nightmare in which American forces suffered 26,000 casualties, including Larson who was wounded and evacuated. Nearly 7,000 Marines lost their lives on that single Pacific island.