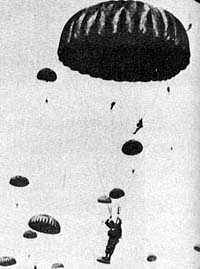 Glen LaPine wanted to be a smoke jumper with the Forest Service. Instead, after enlisting in the Army in the spring of 1943, he became a paratrooper in the 82nd Airborne Division. He landed in Normandy ahead of the D-Day assault forces and cleared targets inland. As a sergeant, LaPine led his company in an assault after the officers had been killed or wounded, and he subsequently won a battlefield commission. Later he was assigned to the newly formed 17th Airborne and fought at the Battle of the Bulge. He then volunteered for duty in the Pacific, but the war ended before he arrived there. LaPine later served in Korea in the early 1950s with the 187th Regimental Combat Team.