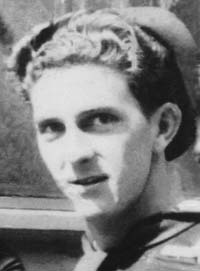 Glenn H. Parkin enlisted in the Navy and began duty in May 1941 on the heavy cruiser USS Northampton. He was stationed near Pearl Harbor when the Japanese attacked and was assigned to fight fires there. He was aboard the Northampton during the first strike against the Japanese in February 1942–the shelling of Wotje Island–and during the carrier-launched Doolittle raid on Tokyo three months later. He saw combat at Guadalcanal and survived the sinking of the Northampton in the New Hebrides Islands. He then joined the destroyer USS Hoel which was sunk off Leyte Gulf. Parkin spent 52 hours in the water before being rescued. He completed 32 years of naval service.