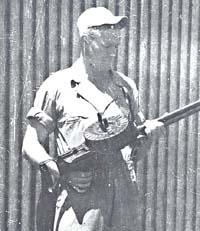 Harold Poole entered the Army in 1940 at Fort Douglas. He was trained as an armament repairman and stationed in the Philippines. He was at Clark Field on December 8, 1941 when Japanese bombers attacked. He brought down one of the planes with machine gun fire. Four months later he was captured on Bataan and survived the infamous Bataan Death March and three-and-a-half years of brutal imprisonment, torture, disease and starvation. He endured a month-long passage on a tightly packed “hell ship” enroute to slave labor in Japan. Then suddenly, three-and-a-half years later, the prisoners were not called out to work and soon learned the war was over. Poole returned to his family who had received no word of him for more than a year after his capture.