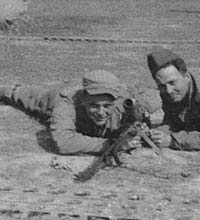 Steven Poulos enlisted in the Army in 1943 shortly after graduating from high school. He was assigned to the 2nd Infantry Division that was part of the second wave in the D-Day landing at Normandy. His landing craft disgorged his unit into the sea 100 yards from shore, and he spent two days pinned down on bloody Omaha Beach. Poulos was reassigned to the 29th Division and engaged in deadly hedgerow fighting in France. He suffered wounds in the leg, side, back and neck from machine gun fire. He was hospitalized in England and New York for several months before being sent to the Army’s Bushnell General Hospital in Brigham City, Utah.