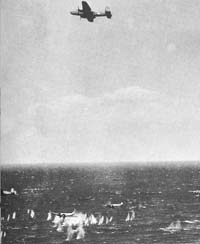 T. Upton Ramsey enlisted in the Army Air Corps the day after Pearl Harbor and trained as a B-25 bomber pilot. He served in North Africa and flew sea sweeps against German shipping. On one occasion, his bomber group attacked and destroyed two-thirds of a large formation of German transports, an action that made the cover of Life magazine. Ramsey flew more than 50 missions over Sicily, Corsica, Italy, southern France and Greece. He ferried a special B-29 from Omaha to Wendover and later learned it was the “Enola Gay” that dropped the atomic bomb on Hiroshima. He also delivered the U.S. flag that was flying over the Capitol the day Pearl Harbor was bombed, to the surrender ceremony at Tokyo Bay, and attended that historic event.