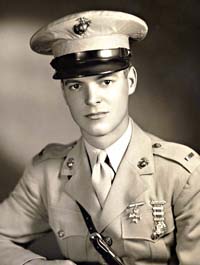 Robert C. Kennedy enlisted in the Marines the day  after Pearl Harbor, but was sent back to school to complete his college degree.  He then re-entered the Corps, finished officer training, and volunteered for  the Marine Raiders, an elite unit patterned after British commandos. They  specialized in surprise amphibious raids or as first-ashore troops in beachhead  landings. Told by his battle-hardened, three-hitch sergeant “to keep yourself  healthy and I’ll run the platoon,” Lt. Kennedy fought at New Georgia in the  Solomon Islands. He was wounded in both arms after the bloody Battle of Bairoko  Harbor, requiring a 16-month recovery in both New Zealand and U.S. hospitals.