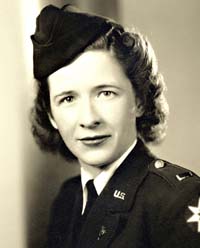 Lillian C. Heenan joined the Army Nurse Corps in November 1942 and shipped to North Africa in April 1943. She served with the 94th Evacuation Hospital in Algeria, then at Salerno in support of the U.S. 5th Army after the Allied invasion of Italy. Working endless hours as an operating room anesthetist, Heenan endured the bloody beachhead at Anzio where hospitals were located for quick access to the wounded, but were also well within range of bombers and artillery, and within sight of combat action. Heenan was among the first female medical personnel to enter Rome. After VE Day, the 94th Evacuation Hospital was on its way to the Pacific when Japan surrendered.