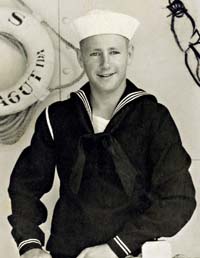 J. MacPherson “Mac” Munk started his naval service soon after the outbreak of World War II. He was first sent to Vella Lavella near Guadalcanal where he searched out Japanese soldiers in-hiding. He was next assigned to a landing craft that had been converted to a gunboat, and participated in the battles of Peleliu, Okinawa and others. While on patrol near Okinawa, Munk spotted Japanese planes approaching. The crew fired at the planes but missed, then one turned around and came back. The Kamikaze crashed into the sea, barely missing Munk and his crew. Munk was able to retrieve the parachute and silk scarf that the pilot had worn.