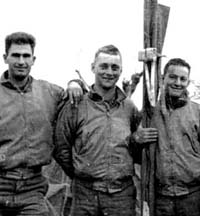 Max Sirstins was drafted into the Army at age 22, trained as an infantryman, and shipped to Italy. When he said he didn’t want to kill anyone, he was assigned as a stretcher-bearer in the 34th Infantry Division. He arrived in Naples in October 1943. His first battle at Pantano was followed by three crossings of the Volturno River. Later he saw action at the Anzio beachhead where he noticed that wearing a red cross arm band made him a target, so he removed it. For his assistance of a wounded comrade just outside Rome, he was awarded the Silver Star. He is also the recipient of the Purple Heart and the Croix de Guerre.