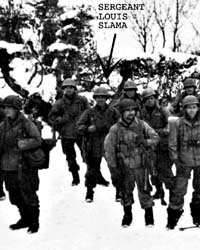 Louis Slama enlisted in the Army in September 1943 and joined the 508th Airborne Parachute Infantry. In September 1944 he jumped into Holland where he and his unit helped save the Nijmegen Bridge from destruction. Next, in Belgium, his unit set up perimeters to stop the Germans. They continued down the Siegfried Line, leaving behind one of the bloodiest actions in the Battle of the Bulge. Slama endured other harrowing missions until he was wounded. He recuperated in Ireland and France for three-and-a-half months. Following the war, Slama rejoined the 508th as a special guard for General Eisenhower.