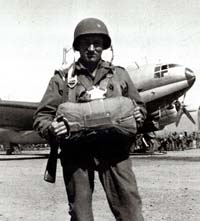 Robert Tripp enlisted in the Army just 30 days before the end of World War II. He was sent to Japan with the 187th Airborne. Later, during the Korean War, Tripp made two parachute jumps behind enemy lines and fought at the battles of Wonju and Inje. He received the Purple Heart after he was bayoneted by a North Korean soldier. Following service in Korea, Tripp was sent to Alaska and helped organize the Army’s first biathlon ski team. In 1963, while a military advisor in Vietnam, Tripp came under fire in an ambush, where he dragged the wounded to safety. Led by his example, others arrived to assist and prevent further casualties. Tripp received the Combat Infantry Badge 2nd Award, the Purple Heart, and the Bronze Star. He retired from the military in 1968.